My husband grew up in Orange California and lived in Southern California for 30+ years, until he moved across country to be with me. He absolutely loves Horchata, but we haven’t found a good horchata at any of the local Mexican restaurants around us. (We live in the Midwest.)

Horchata is a rice milk from Mexico, though Spain and many Latin American countries also have a version of their own.

So I did a lot of research and I found this amazing recipe from My Latina Table. Her directions were a little confusing to me; she tells you to throw out the rice water after it’s been soaking overnight, which didn’t feel right to me. Many other recipes online keep the soaking rice water (after you strain the rice), so I decided to do the same.

In my recipe, I use the rice water as the base for the Horchata.

The Vietnamese also have a rice milk drink that my mom makes for my baby. She says that in Vietnam that they feed it to their babies to give them strength. This was in the old days when they didn’t have formula and times were hard (post-war).

Horchata is super easy to make. All you need to do is soak rice in water with two cinnamon sticks overnight. (For extra flavor, if you have it on hand, add sliced almonds to the mix.) Then you blend it all together. Strain the water, add evaporated milk, and sugar. Serve over ice and sprinkle ground cinnamon on top. It’s delicious and so easy.

I’ve been making one pitcher of horchata every night. My husband accidentally bought the wrong kind of white rice from Costco (he bought a huge bag of Basmati rice instead of Jasmine rice, which is my preferred type of rice), so I needed to find a solution to use up all the rice we currently have. Cinnamon Horchata is the perfect solution.

This recipe gets my husband’s seal of approval, and I absolutely love it too. I’ve made it multiple times and have enjoyed it every single time.

For a really creamy horchata, make sure to pick up evaporated milk. You could use regular milk (or a milk substitute), but it doesn’t have the same creaminess. I’ve enjoyed it both ways, but adding evaporated milk seemed to be the most delicious.

This recipe is so delicious and so easy. It’s a wonderful drink to have after dinner. Quite refreshing and so, so, so good.

You need a very strong blender to make this recipe since you have to blend the rice and cinnamon sticks in the water. I have a Ninja Professional Blender 72 oz Blender from Amazon, which does an amazing job. I highly recommend it! 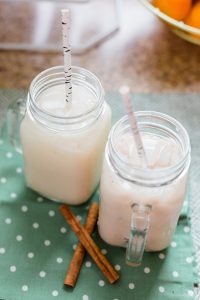 To Make the Horchata

If you like your horchata sweeter, add more sugar. If you don’t want to use evaporated milk, you can use regular whole milk or a milk substitute (almond milk, coconut milk, etc.)

This post may contain affiliate links. Please read our disclosure for more info.