When you think of Vietnamese food, what comes to mind? Let me guess . . . is it Pho?

The Japanese are known for their Sushi; the Koreans for Kim Chi; and the Vietnamese for Pho.

Pho is considered the national dish of Vietnam. It’s a Vietnamese noodle soup that can be made from beef or chicken. In the United States, Pho Bo (the beef version of this famous dish) is more popular and more commonly served in restaurants.

We eat it for breakfast, lunch, and dinner. It’s a very popular street food, and if you ever visit Vietnam, you will see Pho stalls everywhere you go. Every Vietnamese family has their own version of Pho, depending on what spices they like to use and the quantity of the spices.

Chicken Pho – the Perfect Recipe for Colds and Hangovers

Today I’m going to share my own version of Chicken Pho – or Vietnamese Chicken Noodle Soup. Chicken Pho is not as time consuming as the more commonly known, Beef Pho (which can take up to 8 hours to cook the broth). I made this a few weeks ago when I was sick with a nasty summer cold, and I do believe that this soup cured me and helped me feel 100 percent better!

Keep in mind that the spices (and the quantity) in the recipe below are suggestions. You can add more or less of the ingredients, depending on your taste preferences. These are just my personal tastes. (Some people love star anise, but I find that it can be too overpowering if you use too much.)

As a suggestion, I would recommend that you avoid overly salting, or overly adding fish sauce to the entire pot of Chicken Pho. You can make the broth blander and have each individual add a teaspoon or tablespoon of fish sauce to their broth, to suit their taste. (It’s always better for soup to be not salty enough, rather than too salty.)

I used a 5-quart stock pot, but you can use any size stock pot that you want.

I cheated a little bit in making the pho broth. I went and bought a package of Pho spices at my local Asian supermarket. It cost about $2 (much cheaper than buying spices individually). This is the exact brand I used – Old Man Que Huong Pho Bac Spice Seasoning – 1.5 oz. The spices in the package include star anise, cinnamon sticks, cloves, cardamom, and coriander pods. Inside the package was also a little cheesecloth bag for the spices to go into – which is very handy, since letting the herbs loose in the broth can be a hassle when you’re serving the Pho.

* If you can’t find the Pho spices, gather the following spices:

Most Asian supermarkets should have a package of Pho spices, though.

* Special thanks to the Steamy Kitchen for sharing what exactly is in this Pho spice seasoning package. * I was out of pho noodles when I took the above photo, so I ate my chicken pho with ramen noodles. Still tasted delicious!

1. Char the Onion and Ginger Charring brings out the natural aroma of the onion and ginger, and it will help create a naturally sweet and robust Pho broth.

If you’re short on time, you can skip the charring process. Some Vietnamese chefs place the raw onion and ginger directly in the pot without charring it first.

For my chicken pho, I just buy a whole chicken that the butcher has already cut up. You can ask your local butcher to do this for you, or sometimes, grocery stores sell packages of whole chicken, divided into sections. I would highly recommend you do this, since it will make your job much easier.

If you are using a whole chicken, you will need to cut it up yourself. Detach the chicken wings and cut off at the shoulder joints. Cut off the breast meat and set aside. Take a large cleaver; whack the chicken into two pieces – essentially making a “split chicken.” Whack at the bones of the chicken to expose the bone marrow. This will enrich the Pho and makes the broth more flavorful.

Whether you buy whole chicken or chicken pieces, make sure you wash the chicken with plenty of salt and water before you parboil it.

To have a clean, clear Pho broth, you must first parboil the chicken. This will get rid of the impurities in the chicken – like blood and fat that you don’t want in your Pho Ga.

Fill a large pot with water. Add the chicken parts (not the chicken breast). Turn the heat on high, and boil for five minutes. As the pot boils, you will see a lot of scum and grossness.

Drain the pot and rinse the chicken to wash off any residue. The chicken will be partially cooked at this point and will look something like this: If you are using the same pot to make the broth, thoroughly wash the pot.

Add 5-quarts of water to a large pot. Add the chicken. Add the charred onion and ginger, the Pho spices (in a cheesecloth), and the daikon. (The daikon adds an extra layer of natural sweetness that I like.)

Skim off the fat and any unwanted scum that you see floating to the top of the broth. Turn the heat to high. Allow the pot to come to a boil. Then lower the heat to a simmer. (Use the lowest heat setting on your stove. For me, it used 1.)

Add the sugar and fish sauce.

After 30 minutes, remove the chicken breast. Allow it to cool and shred the breast meat. Set aside to serve with the finished Pho. At this time, you can also remove the other chicken pieces and carve all the meat off the bones. Shred the meat and set aside. Return the chicken carcass to the Pho stock. Simmer uncovered for another two hours.

After two hours, taste the broth. Add more fish sauce or sugar, if needed. Your broth is ready to be ladled!

Most chefs like to strain the broth and discard everything else (onion, ginger, spice bag, chicken carcass) at this point.

Your broth should be clear and look delicious. You should have about 4 quarts or 16 cups of Pho broth. Yummy!

You can find directions on how to prepare the Pho noodles on the package. If you are using fresh Pho noodles (Banh Pho Tuoi), you will need to boil a pot of water. Quickly add the noodles for about a minute, until they are cooked.

Transfer to a medium to large bowl. (You’ll be using this bowl to eat your Pho Ga.)

On top of your cooked Pho noodles, you will add the shredded chicken meat (from earlier). Ladle the hot broth on top.

For a sweeter taste, you can add a squirt of hoisin sauce to your individual bowl. And for some spiciness, add some Sriracha sauce. A squirt of lime also enhances the flavor of the Pho Ga.

Allow each person to choose his or her own toppings. Use whatever you have on hand.

In South Vietnam (where I am from), we top our Pho Ga with some bean sprouts, sliced onion, and sliced scallions. We also eat our Pho with Thai Basil and sliced hot peppers. 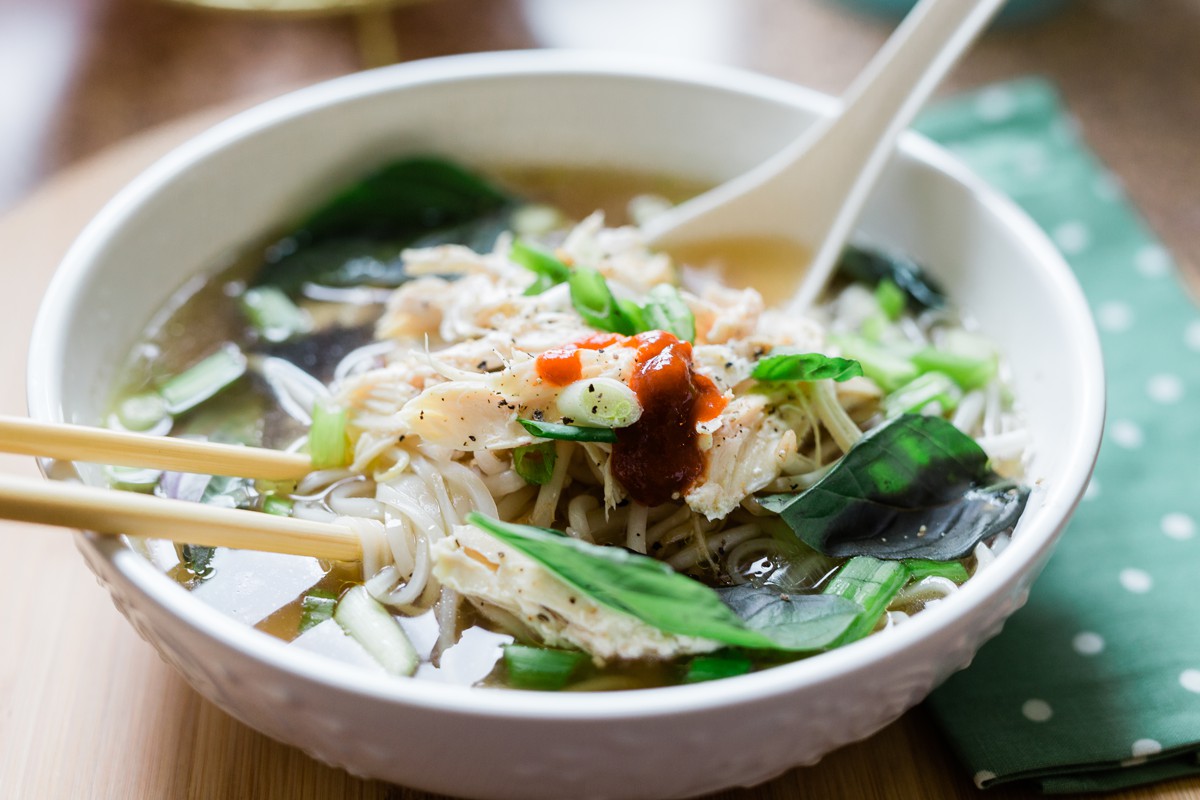 Based on 9 Review(s)
Previous Post: « My Obsession with Vietnamese Cuisine
Next Post: Red Wine Risotto with Asparagus and Peas »